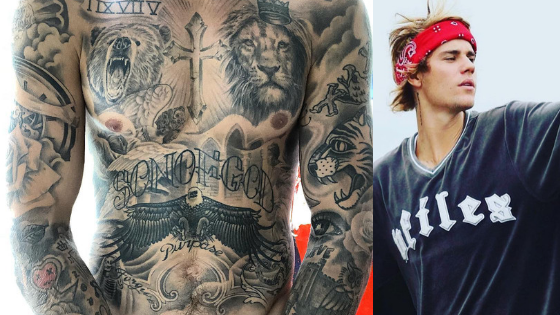 Many celebrities like to draw attention to themselves. One of the ways that some try to accomplish this is by getting tattooed. Most celebrities, like non-celebrities, prefer small, modest tattoos including flowers, butterflies and names of loved ones. But there are those who like to shock, especially since the media is always drawn to highlighting unique tattoos, with the more provocative the tattoo, the better.

The willingness of celebrities to expose, shock and horrify the public by their tattoos is striking. From tattoos of the online casino South Africa to symbols, types of food, images of body parts and incomprehensible words and phrases, celebrities provide us with unique, unusual, intriguing and shocking tattoos. Some of the stand-outs:

Kendall Jenner got a tattoo of “Meow” on the inside of her lip after a night out drinking with friends. She says that she chose “meow” because it was the first word that she thought of when she was ready to be tatted.  Her sister Kim Kardashian is anti-tattoo but Kendall, who has a few tattoos, insists that the ink allows her to express who she really is. “The one on my right hand is a full heart to represent an angel and my left is a broken heart—kind of like the devil side.”

Dennis Rodman is well known for a body that’s covered with tattoos. Probably one of the most unforgettable of the art work is that of a naked woman pulling on a part of the body that’s usually covered with underwear – with her teeth. Rodman loves outrageous tattoos and his body art also includes horned beasts preparing for a fight,  tribal tattoos, a shark swimming through a giant sun, a giant squid and a pitchfork-wielding she-devil.

Rodman has said that his dream is to get eyeballs tattooed on the back of his head “so everybody knows I’m always watching.”

Disgraced former Today show host Matt Lauer isn’t shying away from keeping himself in the limelight. Lauer, who is accused of sexual misconduct in his position as a bigwig at NBC and even of rape (charges that he has denied), inked on his forearm   the phrase “Hatred corrodes the container it’s carried in.”

Comedian, actor and stuntman Steve-O has over 30 tattoos but the most unusual might be the phrase that he tattooed on his back with the words  “Yeah dude, I rock!” with his own signature underneath.  Steve-O has said that he regrets that one but it hasn’t stopped him from further inking of his body including three separate tattoo designs of male private parts, a self-portrait, a replica of Angelina Jolie’s Billy Bob tattoo, a silhouette of an obese pin-up and a Blood and Crips piece.

Orlando Bloom tattooed his son’s name, Flynn, in Morse code on his arm. On the first try the code came out “Frynn” but Bloom was able to add an extra dot and fix it. Luckily he didn’t have to have a dot removed.

Chris Brown was jailed after he beat up Rihanna in a high-profile incident that put both of them in the spotlight. After Brown was released from jail, he was tattooed with an image of of what looks like a  beaten and bruised woman. Brown claimed that the image was that of a Mexican sugar skull and had no relation to Rihanna but there are doubters.

Miley Cyrus paid tribute to her then-partner Liam Hemsworth’s love of vegemite by getting an image of a jar of vegemite tattooed on her left arm. Vegemite is a spread made of brewer’s yeast extract and is a favorite in the UK where people often spread it on bread or crackers. Cyrus’s relationship with Hemsworth didn’t last for long but her vegemite tattoo is going to be around for awhile.

The vegemite tattoo joined Cyrus’s other body ink which include images of an equal sign, the word “karma,” an evil eye, a slice of watermelon, a dreamcatcher, an animal tooth, an anatomical heart and Roman numerals. Not all the tattoos are visible including the tattoo of a  Rolling Stone on the soles of her foot and a crying cat on the inside of her bottom lip.

Miley Cyrus isn’t the only former Disney star who has become a fan of tattoos. Selena Gomez has 12 known tattoos including the number ‘4’ on the inside of her upper arm and a large praying-hands mural on her upper thigh. She also has a “Rare” tattoo behind her ear.

T-Pain had the word “Tattoo” tattooed, just to make it clear that it was a….you guessed it….a tattoo. Nothing else need be said.

Lena Dunham has over 24 tattoos but her fans question whether she should have publicized her battle with chronic illness by tattooing the word “Sick” on the back of her neck. The letters were inked in font reminiscent of a cartoon rope. In explaining her choice, Dunham said “Sometimes, the thing you’re most scared of being called is the best thing you can call yourself.”

Singer Halsey got a tattoo on her right knee cap with images of two band-aids overlaid with the words, “poor thing.”

Ariana wanted to immortalize her song “7 Rings” with a tattoo that was supposed to have said “7 Rings” in Japanese. The Japanese lettering came out to read “Japanese BBQ Finger” and when Ariana tried to fix it, it got even more muddled. It still doesn’t say “7 Rings.”

Model Cara Delevingne is a fan of tattoos and has over 20 of them. She had  tattoos of eyes inked right on her eyes. The tattooed eyes create the illusion that those eyes follow individuals standing in her line of sight as they move from side to side.

Ryan Cabrena had a tattoo of Ryan Gosling inked on his right leg. Gosling has not, as far as is known, see the tattoo.

mindmingles
Next Story → What Do You Think About Elevator Shoes for Men?