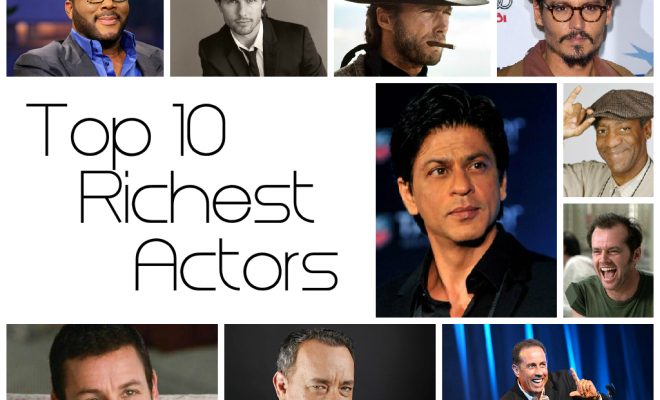 Top Ten Richest Actors in the World in 2020

Love movies, eh? I bet you would want to know who the richest actors in the world are. There are not a lot of professions that can make you a multi-millionaire. Apart from being a businessman or sports personality, the options of getting insanely rich are bleak. One such career is acting. It is a profession that can make you fabulously wealthy and famous. Over the years, the world has seen some crazy rich actors, some making money purely through movies, whereas some are igniting their worth with brand deals and advertisements.

In this article, we’ll talk about the richest actors in the world in 2020. Please note that this list doesn’t consist of musicians or TV or internet personalities, but pure actors who have given some breakthrough performances in the history of cinema.

Let’s begin the list with none other than Rambo, Sylvester Enzio Stallone. This 73-year-old American actor, director, screenwriter, and producer has managed to muster a net worth of $400 million over is a 50-year long career in the movie industry. Stallone arrived in New York in 1969 and started his beginnings as a struggling actor for several years.

The actor has received numerous awards, nominations, and recognition for his work, including three Oscar nominations, one Golden Globes award, and The César Award.

9. Arnold Schwarzenegger – $400 Million among the richest actors in the world

Arnold Alois Schwarzenegger is an Austrian-American actor, filmmaker, author, and businessmen best known for his role in the Terminator movie series. He is a former bodybuilder, and he has also served as the 38th Governer of California from 2003 to 2011. As of 2020, he is the most recent Republican Governor of California.

Arnold is a global icon and one of the most beloved actors across the globe. Apart from the Terminator franchise, he also starred in blockbuster movies, such as Commando (1985) and True Lies (1994). His current net worth as of 2020 is $400 million.

Amitabh Bachchan is an Indian film actor, TV host, film producer, playback singer, and former politician. Renowned as one of the greatest actors in Bollywood, Amitabh Bachchan gained popularity in the early 1970s with a streak of superhit movies, like Zanjeer, Sholay, Deewar, and more.

Amitabh is one of the most beloved actors in the Bollywood industry and is to date taking up small movie roles and continuing to thrill his fans. The 77-year old is also one of the richest actors in India and 7th richest actor in the world, with an estimated net worth of more than $450 million.

Jack Nicholson is an American actor and filmmaker with a long career that has spanned more than 60 years. He has played a broad range of starring and supporting roles in all kinds of movies, including romance, comedy, darkly comedy, and more.

Adam Sandler is an American actor, screenwriter, film producer, singer-songwriter, and comedian. He came into the limelight when he became a Saturday Night Live cast member. Then, he went on to star in several Hollywood movies that are known to have grossed more than $2 billion combined.

Adams’s two biggest movies, Hotel Transylvania 2 and Big Daddy, both grossed over $180 million each. As of 2020, Adam Sandler is one of the highest-earning stars in Hollywood, with an estimated worth of $500 million.

Mel Colmcille Gerard Gibson AO (stage name Mel Gibson) is an American actor and filmmaker best known for his action hero roles. He is best known for his breakout role as Max Rockatansky in the first three films of the action series Mad Max. Another one of his celebrated roles is Martin Riggs in the buddy cop movie series Lethal Weapon.

The 64-year-old actor also has an Oscar and Golden Globe under his belt for his scintillating performance in the 1995 movie Braveheart. Gibson is one of Hollywood’s hottest properties, with an estimated net worth of $520 million.

George Timothy Clooney is an American actor, director, film producer, and activities. He is the recipient of two Academy Awards and three Golden Globe Awards. Clooney also received the AFI Lifetime Achievement Award in 2018. The 59-year-old actor is best known for his role in the TV series ER and the Ocean’s movie franchise.

Besides his success has a Hollywood celebrity, George Clooney also made news for his partnership with Nespresso and the recent sale of his tequila brand for almost a billion dollars. The estimated net worth of George as of 2020 is $550 million.

The second-highest net worth actor on the list of the richest actors in the world 2020 is Thomas Cruise Mapother IV. Tom is an American actor and producer known for his performance in the movie franchise Mission Impossible. The actor has received three Golden Globe awards, three Academy Award nominations, and various other accolades.

Apart from the Mission Impossible franchise, Tom is also known for his roles in the movies Top Gun (1986) and Edge of Tomorrow (2014). The 58-year old star is one of the highest-paid actors in the world, with a net worth of around $600 million.

Topping the list of the richest actors in the world is Shah Rukh Khan. Also known by the initialism SRK, Shah Rukh is an Indian actor, film producer, and TV personality. Having appeared in more than 80 films and earning numerous accolades along with 14 Filmfare Awards, SRK is earned the title “King of Bollywood.”

The 54-year-old highest net worth actor has been a part of many successful Bollywood movies, namely Kuch Kuch Hota Hai, Kachi Khushi Kabhie Gum, DDLJ, Om Shanti Om, and more. SRK is one of the highest-paid actors in India and the richest actor in the world, with an estimated net worth of $700 million.

Acting is a profession that can make a person rich and successful, whereas the other person may struggle to make ends meet. It can be a slightly unfair career, but if you survive the initial years of success, you end up with respect, popularity, and fortune.

So, which actor among the ones on the list is your most favorite, and why?